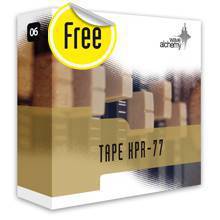 The KPR-77 was originally manufactured by Korg in the early 1980’s and was advertised as a cheaper alternative to Roland’s successful TR-606 drum machine. Surprisingly this quirky little analogue machine is capable of producing quite powerful drum sounds, we are especially fond of the toms, snares and claps!

Tape KPR-77 contains three pre-mapped drum kit patches for use with Kontakt 2, 3, & 4 and Battery 3. Each kit makes use of extensive velocity layering, round robin sample playback and choke groups which in turn capture the quirkiness and expressiveness of the original unit.”