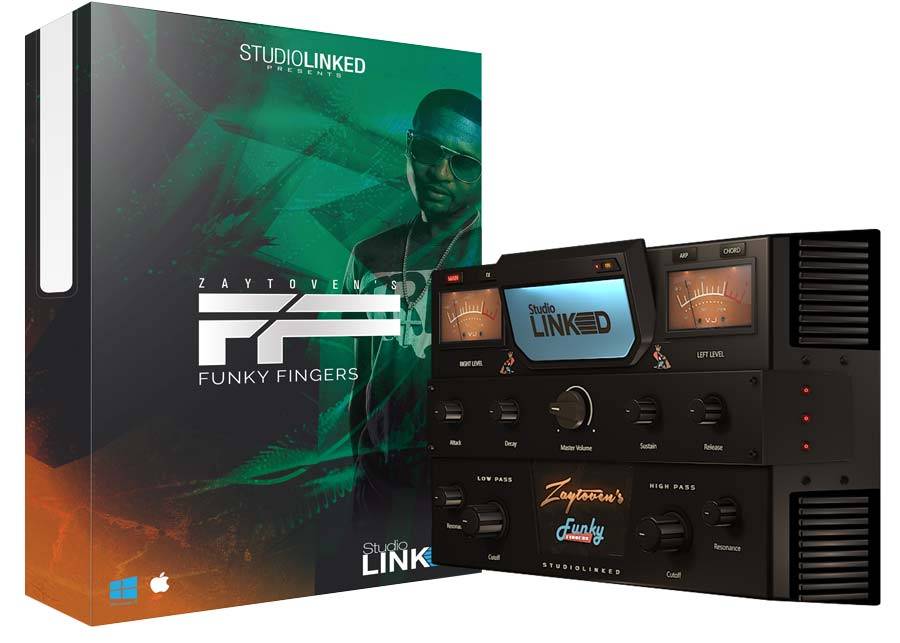 Asked about the motivation behind the creation of his virtual instrument namesake, Zaytoven himself has this to say: “I just took everything I learned over all of the years of making beats and playing piano, and put it into this virtual instrument engineered with the modern producer in mind.”

Mindful of that very thought, no fewer than 500 Zaytoven-influenced presets are available across 17 instrument categories, including CHORDS — with numerous church chord combinations, such as major and minor sevenths, ninths, and tritone substitutions that are perfect for those looking to add a little soul or gospel to their productions; KEYBOARDS; LOW END BASS; OJ Da Juiceman Chants; ORGAN RUNS — organ patches quickly rolling across several notes into a minor chord, which is exactly what many producers who have followed Zaytoven’s career have been waiting for; SUBS & 808s, and much more. Drum kits are accessible in the DRUM section where StudioLinked has helpfully placed one-shot drum samples across each key on the keyboard, as well as the first ever hi-hat stutters and snare rolls, making it even easier to achieve advanced drum programming techniques commonly found in today’s music.

Moreover, users can craft their own original sounds, speedily accessing various controls, including Attack, Decay, Sustain, and Release; Glide; Low, Low Mid, High Mid, and High EQ; TRANCE GATE; CHORDS; LOW PASS and HIGH PASS filtering with Resonance; ARP (arpeggiator); and effects such as Reverb, Chorus, Pitch, Phaser, and Tremolo. Dig deeper, though, and there’s a whole lot more to ZAYTOVEN’S FUNKY FINGERS than might first meet the eye, thanks to its eye-catching GUI (Graphical User Interface). Indeed, StudioLinked’s research and development team decided to hand-code this virtual instrument using C++ and the JUCE framework, having worked with Zaytoven for months, designing and engineering instruments that were similar to his signature sound.

Stopping there was not an option, however, as StudioLinked set about incorporating features and functionality that will inspire future generations of beat-makers to develop their own original sound. Speaking of which, one of the company’s collective favourite moments during the creation of its latest virtual instrument was being in the studio with recording artist OJ da Juiceman, recording signature ad libs and chants that can only be found in ZAYTOVEN’S FUNKY FINGERS, time-stretched and mapped across the keyboard to make it easy to control each recording — just like any other instrument.

Since StudioLinked is known for adding unique vocal runs in products like its (Mac- and PC-compatible) standalone PURE plug-in workstation, why not do something similar with ZAYTOVEN’S FUNKY FINGERS yet take it to another level given that it represents the company’s biggest project to date? Why not, indeed! It was decided, therefore, to also have Zaytoven artist Arryet Love record some amazing vocal runs and place them into the virtual instrument itself (as Arryet Vox Runs). Meanwhile, MELODY STARTERS sample tons of Rhodes-played, pre-made melodies that are helpful for sparking inspiration.

Inspiration is now available at a pocket-friendly price to aspiring producers and budding beat-makers everywhere, thanks to ZAYTOVEN’S FUNKY FINGERS. “I remember back in the day in my bedroom when I just had a keyboard — not even really a drum machine, and I wanted to make beats,” backtracks Zaytoven. “I would listen to the radio, listening to all the sounds, and I was, like, ‘Man, ain’t ever gonna be able to make beats sounding that good, because I don’t have the tech and sounds that those guys are using to make it sound so good.’ So that’s really why I came up with my own plug-in. This is just something to spark creativity right now, because sound has always inspired me to make beats — from the piano riffs to auto-organ and church organ that I like to use… it’s all right here, man! Right here for you to grab, so make sure that you get it — FUNKY FINGERS!”

So there you have it — right from the maker’s mouth. Go get yourself ZAYTOVEN’S FUNKY FINGERS and ignite that creative spark… with a little help from your friends at StudioLinked and one of the best beat-makers in the business. Bet your bottom dollar, then, that StudioLinked’s biggest project to date is finger lickin’ good while more than living up to the company’s tagline: We Make What You Want To Hear